In this article, we will be discussing how we can implement GraphQL in Java and integrate it with a real-time Spring boot project from scratch. The project will be a maven based project having spring data integrated to fetch data from MySQL database.

We will implement multiple GraphQL data fetchers which will inturn utilize spring data JpaRepository to query the DB.

GraphQL is a specification to fetch data from the server to the client over an HTTP call. The specification describes how to ask for data and rather than asking the whole bunch of data at once, it specifies to ask only the required data that would be meaningful to a client. It is just an alternative to REST in some way.

For example, we have a GET employee REST API that returns the details of an employee. There could be 50 different fields associated with an employee such as name, DOB, address, level, salary, age, etc but sending all these fields in the response of a REST call does not make sense and it could be difficult to determine what are the fields that should be actually sent in the response and tomorrow the requirement might change and we might require to add some more fields.

In some situation, we start versioning of the API and it becomes difficult to maintain those APIs.

With GraphQL, there is a single entry point that takes care of all kinds of client Query and the client can decide which Query needs to be executed that could be to either fetch employee details or to fetch any department details or it could be any other app info over the same entry point and even the client can decide what are the attributes that he is interested in.

For example the same endpoint http://localhost:8080/api/graphql/dept can be used to fetch all department lists or find a single department based on ID with different queries (payloads).

For both the payloads, the endpoint remains the same whereas the request and response differ.

While fetching department details sometimes it might be useful to fetch the name and description of a department whereas in some cases we might be only interested in knowing the employee's details of a particular department and this could be easily achieved through GraphQL.

Difference Between GraphQL and REST

Now, we will manually add GraphQL related maven dependencies in our pom.xml. Below are those dependencies that we have added to our pom file.

graphql-java is the Java (server) implementation for GraphQL for executing queries where as graphql-java-spring-boot-starter-webmvc for exposing the API via Spring Boot over HTTP.

We will have 2 model classes - Department.java and Employee.java. Department and employee will have a one-many relationship. Below are the class implementation.

Now let us define our controller class. As discussed above, in GraphQL we have a single entry point and hence the controller class contains only one endpoint that takes a string quey as as a body input. We will discuss the GraphQLProvider in the below sections.

The GraphQL schema file describes the type of query that can be performed by the client and the different fields that can be sent in the response. Below is our schema file created inside src/main/resources

The client can perform 2 different queries as allDepts and deptById and we have defined the different fields that a client can expect in the response. Now, the client has to decide what are the fields that he is interested in.

A sample request from the client is given below where a client is only interested in name of the departments.

Data fetchers are the implementation for fetching the actual data that can be either from a DB or any third party API.

We also have a simple implementation to load the data into the DB during application startup.

Now, we have done our schema defined and our data fetchers are ready and now we have to implement the wiring between the schema file and the data fetchers so that the GraphQL can know which data fetcher to be executed based on the query requested by the client.

GraphQL providers act as a wiring between the schema file and the data fetchers that we created above.

The spring bean GraphQL is required by GraphQL Java Spring adapter will to make our schema available via HTTP on the default url /graphql.

TypeDefinitionRegistry is the parsed version of our schema file that was loaded from the classpath with the Guava library.

The buildWiring() actually wires the query and the data fetchers.

This is pretty much the immplenetation of GraphQL with Spring Boot. Next, let us test our app.

To test the app, let us simply run the SpringBootGraphqlApplication.java as a java application and then we can make some sample requests as below: 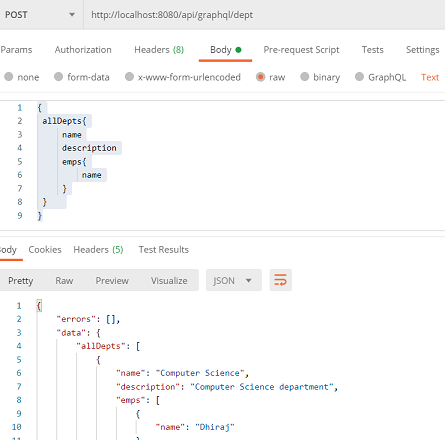 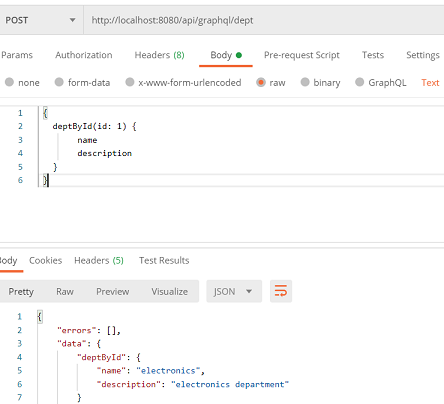 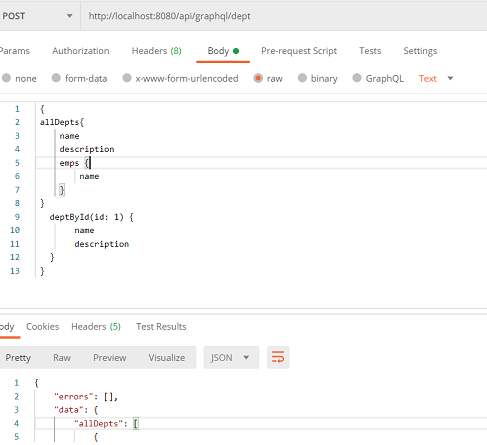 We can also create our data fetchers by implementing DataFetcher interface as below but make sure you wire the same in our GraphQL provider implementation.

In this article, we discussed how we can implement GraphQL in Java and integrate it with a real-time Spring boot project from scratch. Next, we can explore how exception handling can be done in this implementation.