50 Interesting Quotes That Made Me A Developer 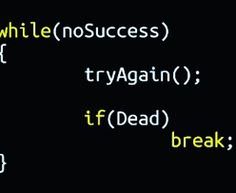 Here I am sharing 50 best motivational, inspirational and interesting quotes from the web that has motivated me to become a developer. These quotes are very inspiring and I felt these will motivate other programmers too and help to avoid common pitfalls in development and hence I thought sharing these quotes with everybody.None of these quotes are mine and please forgive if I have missed to mention the right source.

1. Dont't worry if it doesn't work right. If everything did, you'd be out of a job.

3. A programming language is for thinking about programs, not for expressing programs you've already thought of. It should be a pencil, not a pen. - Paul Graham

4. Sometimes it pays to stay in bed on Monday, rather than spending the rest of the week debugging Monday's code. - Dan Salomon

6. One of my most productive days was throwing away 1000 lines of code. Ken Thompson

7. Without requirements or design, programming is the art of adding bugs to an empty text file.

8. One main'scrappy software is another man's full time job.

9. Walking on water and developing software from a specification are easy if both are frozen.

10. Debugging is twice as hard as writing the code in the first place.Therfore, if you write the code as cleverly as possible, you are, by definition, not smart enough to debug it. - Rajanand

11. System programmers are the high priests of a low cult. - Robert S. Barton

16. The computer was born to solve problems that did not exist before. - Bill Gates

17. Real programmers don't comment their code. If it was hard to write, it should be hard to understand.

18. Always code as if the guy who ends up maintaning your code will be a violent psychopath who knows where you live. - Rick Osborne

21. If the code and the comments do not match, possibly both are incorrect. — Norm Schryer

23. If you optimize everything, you will always be unhappy. - Donald Knuth

24. Your mind is programmable - if you're not programming your mind, else will program it for you. - Jeremy Hammond

25. The trouble with programmers is that you can never tell what a programmer is doing until it's too late. - Seymour Cray

26. Debugging becomes significantly easier if you first admit that you are the problem. - William Laeder

27. Talk is cheap.Show me the code. - Linus Torvalds

28. Everybody in this country should learn to program a computer because it teaches you how to think. - Steve Jobs

29. Most good programmers do programming not because they expect to get paid or get adulation by the public, but because it is fun to program. - Rajanand

32. The function of a good software is to make the complex appear to be simple. - Grady Booch

33. Your most unhappy customers are your greatest source of learning. — Bill Gates

34. Small minds are concerned with the extraordinary, great minds with the ordinary. - Blaise Pascal

35. Everyday life is like programming, I guess.If you love something you can put beauty on it. - Donald Knuth

37. Developer is an organism that turns coffee into code.

38. The purpose of software engineering is to control complexity, not to create it.

39. As a programmer, it is your job to put yourself out of business. What you do today can be automated tomorrow. - Doug McIlroy

40. A good programmer is someone who always looks both ways before crossing a one-way street. - Doug Linder

41. Testing can only prove the presence of bugs, not their absence. – Edsger W. Dijkstra

42. Experience is the name everyone gives to their mistakes. – Oscar Wilde

44. Fix the cause, not the symptom. – Steve Maguire

45. Before software can be reusable it first has to be usable. – Ralph Johnson

47. There is a big difference between making a simple product & making a product simple. – Des Traynor

48. In programming, the hard part isn't solving problems, but deciding what problems to solve. – Paul Graham

49. No one in the brief history of computing has ever written a piece of perfect software. It's unlikely that you'll be the first. – Andy Hunt

If you have any other motivational quotes that you would like to share with other developers, your quotes are most welcome in the comment box below: